Is It Wrong to Try to Pick Up Girls in a Dungeon?

Also known as “DanMachi’ or “Familia Myth”, this anime has been both a light novel and manga before it was picked up by J.C. Staff for adaptation.

Set in the world Orario, adventurers set out for fame, money, and glory to a dungeon where they gain experience fighting monsters and other kinds of beasts. The adventurers are set up in “familias” which are led by gods (who have made the choice to live among humans at a loss of their divine powers). The gods in the show are taken from all sorts of mythologies: Greek, Roman, Norse, and Hindu.

The story follows Bell Cranel, a young (and new) adventurer, who is the only member of the Hestia familia. Bell is an earnest kid who just wants to be the best adventurer he can be and to become a hero one day. Hestia (named for the Greek Goddess of the hearth) is a low level goddess who is portrayed as a big chested “loli”. 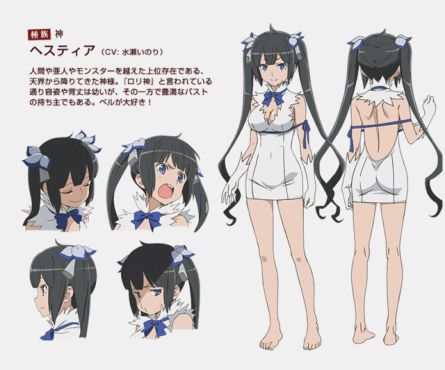 She is very protective of Bel and tries her best to support her only family member, but she can be a little too clingy/ possessive when it comes to Bel.

In a nutshell the show is largely an adventure based  show (that has a few harem elements) that is largely modeled after Dungeons and Dragons or an MMO, with gods manipulating things in the background.

I liked the show, although it was not a stand out for me this season. The animation was done well and many times it reminded me a little of Sword Art Online. Although my older son pointed out that this may be because both Kirito and Bell are both voiced by Matsouka, Yoshitsugu. The story is decent and I think if it continues, has the potential to become more interesting as you see what the gods are up to behind the scenes.

It also has a decent OP:

Attention Parents: There is fan-service in this one. Big, bouncy, anime chests and some skimpy outfits is the most regular offender in the show. There is also a nude scene at one point. Monsters are getting killed so there is some blood as well. If any of these things offend you: you have been warned.

This was a good show, not great (in my opinion), but worth a watch if you’re looking for something to do.

That’s all I got.

3 thoughts on “A Lolita Goddess and a Well Meaning Hero”