As many who have read this blog before know that my son is a “You-Taite” (see Son Hacks Dad’s Blog Pt 1: Utaite/Youtaite – Basic Cover Stuff, I Guess) .

He just did a pretty good cover of the Kiznaiver OP! Check it out!

There is something wrong with me… I accept and know this.

I got this idea last year that it would be really funny if I cosplayed as a magical girl, but didn’t even try to pass as female.

So who did I choose as my cosplay? Mami Tomoe! 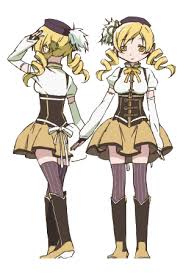 Now, don’t get me wrong. This is no instance of disrespect. I love Puella Magi Madoka Magica. It is one of my favorites.

So much to both of my son’s horror and my delight, I went through with it. I have the whole outfit now and I will be wearing it next week in Chicago at Anime Central for the first time.

There are a lot of people who have been wanting to see this so, not knowing if I’ll remember to take pictures of myself while I’m at ACEN, I took a few today.

Grimagar Of Fantasy And Ash.

Based off a light novel, the story follows a bunch of people who awaken in a RPG like world without any real knowledge of how they got there or where they came from.

All they know is that they need to earn money and to do this you become recruits in a volunteer army and kill monsters.

The show focuses on their day to day life and how they learn to work and grow together as a fighting party. It is very reminiscent of guild game play in an MMO.

The story is good, but often feels slow paced. The character design is good, but nothing outstanding. The background art is what truly stood out for me in this show. It has a very watercolor style feel to it and is quite pretty to look at.

If you are a fan of fantasy and monster killing shows it could go either way about whether you’d like it or not. There is some good action without a doubt, but much of that is overshadowed by the pacing that seems slow at times largely because it is narrated though the main character’s, Haruhiro’s, thoughts.

I watched the English dub and found it to be quite good.

Attention Parents: Grimgar is violent. There is blood and killing, albeit monster’s blood and deaths, but it is there nonetheless if that is a concern. There is a little fan service, but it isn’t overbearing.

Give Grimgar of Fantasy and Ash a look. While not my favorite of the season, it was an entertaining and interesting watch with some real beautiful animation.

*all images in this post are not owned by this site.*

Ojisan To Marshmallow is a short form anime following  Iori Wakabayashi as she tries to get the romantic attention of her coworker, Habahiro Hige. Hige, being older, doesn’t think of Wakabayashi this way. He mostly thinks of marshmallows. The man is obsessed with his marshmallows.

The show is cute, sometimes kind of ecchi, and short with each episode being around 3 minutes long.

I found the show enjoyable. It was, in fact, one of my favorites of the winter season along with Erased.

The show overall is high on the sweet and cute factor, but could stray into ecchi territory at times.

And even though I let my younger son watch it, there were times I was cringing, wondering whether I’d made the wrong choice… Though much of the time many things seemed to go over his head.

Attention Parents: The show is sweet  and cute, but it does get racy at times and has some adult humor thrown in. Is it really bad? No. Is it completely innocent? Absolutely not.

I liked the show. The animation is good, but nothing out of the ordinary. I just found it cute and amusing.

It has been a while since I’ve posted due to life and time constraints. Due to the nature of this show and what can I say about it without giving away too much, I’ll keep my review brief.

Erased was probably my favorite anime of the winter season. Well written, animated, and paced. Erased is what I want out of a show: enjoyable to watch and leaving me looking forward to the next week’s episode.

In short the show follows Satoru Fujinuma. We meet Satoru as adult who has a strange ability (or perhaps affliction?): He goes back in time a few minutes to prevent potentially tragic events from happening. After an accident that involves one of these episodes that leaves Satoru in the hospital, a series of events causes his ability to kick him back to his past in elementary school to prevent a series of child abductions and murders.

What follows is an engaging murder mystery/ thriller. We follow Satoru desperately trying to save his fellow classmates as a young child. We see him trying have the knowledge of an adult while re-living his past as a child. All of this made for a fun watch.

Attention Parents: While there is not a ton of violence shown or fan service, it is a disturbing subject matter. It is about child abduction and murder: that’s heavy stuff and I would suggest vetting it if you are considering letting your child watch it.

It is really worth a view. And very nice to look at to boot!

-no images in this post are owned by this site.