I recently got two nominations for the Sunshine Award by Shay ( Anime Reviewer Girl) and Matthew  ( Matt-in-the-Hat). Thank you both very much, I really appreciate the kind thought of nominating my blog)

1. Thank the person who nominated you.

2. Answer the questions from the person who nominated you.

4. Write the same amount of questions for the bloggers you nominated.

6. Put the award button on your blog.

1. Which do you prefer better: Reading the manga first and then watching the anime, or do you watch the anime and then read the manga?

-I don’t really read much manga. However, I would probably want to watch the anime before reading the manga (I usually prefer to see a movie before I read the book).

2. Which anime series did you really dislike?

-None that I can think of…I didn’t care for how the second half of Guilty Crown ended up.

3. If you could spend one day with a voice actor, who would like to meet?

– That is hard to say…I have met a few American voice actors in passing at conventions and many of them seem to be really nice people. After speaking a little with Greg Ayres I can say he seems to be a really good person who cares about the fans and the anime fan community.

1. Is there an anime you wish didn’t exist?

2. What anime character do you think would be your rival?

None? Anyone too serious for their own good I would guess.

3. If you could have any superpower what would it be?

To sparkle in the most manly way possible like Major Alex Louis Armstrong.

4. What is your favorite movie?

That’s hard… Highlander, Better Off Dead, Big Trouble in Little China, and UHF are all up there. Anime movies: Spirited Away or Princess Mononoke.

Depends on which I start watching first. I am not strictly in one camp or the other.

7. Who is your current anime crush?

None really, but I creep out my boys for fun by saying Kongou (Kancolle) is my waifu.

8. What is your favorite Dessert?

I have really been enjoying matcha mochi ice cream lately.

1. Why did you start to watch anime?

2. What keeps you watching?

3. What else do you do to keep yourself happy, healthy, sane?

Many of you have been nominated lately and so I won’t be offended if you don’t answer. 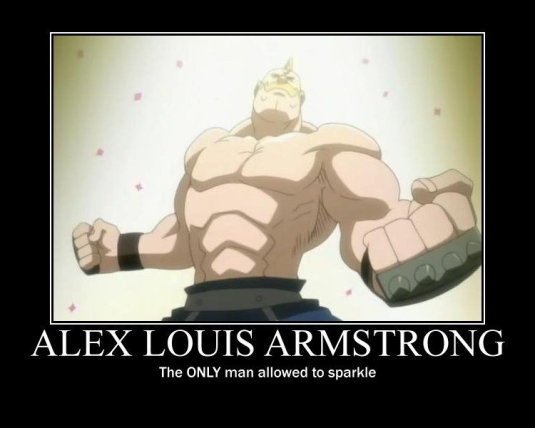