I love this fight scene because of it’s bemused, matter-of-fact nature. Reigen has come to get his student back (Mob) from the Claw organization and is thrust into the middle of an epic battle. Mob finally gives in to trust Reigen and lets go of feeling like he has to be the person to fight. As a result of Mob’s decision, Mob transfers his power,unknowingly, to Reigen. Reigen (with new found power) walks around in a confident manner, deflecting everyone in Claw’s attacks with ease and mild amusement. By the end of the fight he ends up chiding Claw and telling them to grow up. This was a brilliant scene and probably my favorite fight.

I am odd in how I watch anime…well, really any show for that matter.

Depending on my mood, or state of mind, will often determine whether I watch (or continue to watch) a show.

Judgement and preconceived notions take over about whether I’ll like a show.

However, many times, I have found my initial impression (and subsequent dismissal) of a show to be wrong or unfounded.

Magical Girl Raising Project is a show that initially I had written off outright without even watching it. I assumed from the picture and the brief show description on Crunchyroll that it was just going to be some cutesy show that I’d have no real interest in. So I dismissed it. Until I saw an update on one of the blogs I follow that showed some images and talked about the darker themes and violence in the show. Had I not been someone who blogs (and follows others blogs), I would have passed over this one. I’m now watching (and enjoying) this little dark, and brutal show.

March Comes in Like a Lion did not initially not grab me. I don’t know why. Perhaps it was my mood or mental disposition at the time. I didn’t even realize it was done by Shaft (which is one of my favorite studios) which my boys subsequently made fun of me for. One night,when I was bored, I decided to give it another try. It is now one of my favorites of the season.

Mob Psycho 100 is another of those where upon watching the first episode, it didn’t grab me. I don’t know if it was my mood or my initial reaction to the animation, but I had decided it wasn’t for me. But there was a fair amount of “buzz” around it, so I forced myself to watch some more and ended up loving the show.

And it has been like this for me. Sometimes reserving judgement is the best avenue in approaching anime, shows, or life. Waiting to see how it actually reveals itself over a little time.

I was late to the Mob Psycho 100 bandwagon. I had watched the first episode, but something in it didn’t speak to me. I set it aside. Then,I kept hearing about how good it was. One day I was bored and finished with the other shows I was watching so I decided to give it another try.

The show also got me to thinking. Mostly what struck me was the struggles of the characters around self identity and the ethics of power. 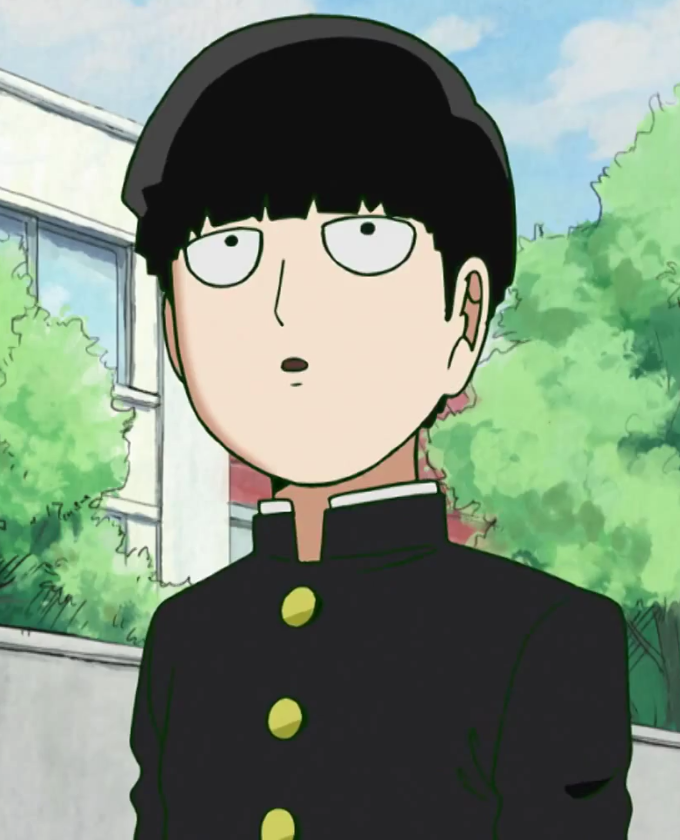 Central to this, of course, is Shigeo Kageyama aka: “Mob”. Mob is an un-athletic, socially  awkward, poor student who is not very remarkable in any way other than he is an extremely powerful psychic. The funny thing is: to Mob, this doesn’t mean much. While the rest of the world would see his abilities as desirable, they are just kind of there to Mob and he doesn’t really see them as all that beneficial. He instead looks up to his younger brother, Ritsu Kageyama.

Ritsu is everything that Mob is not. Athletic, popular, a good student and is a member of the student counsel. Ritsu, however, envy’s his brother’s psychic abilities. Rather than being happy with his own good qualities, Ritsu measures himself against Mob.

Yet this is common in life. We often find ourselves stuck in envying what others have rather than valuing what is good in, and about, ourselves. This theme runs throughout the show to some degree which I found to be interesting.

Mob decides, after an unintentional prompt by  both a ghost he exorcised and the student counsel president, to do something about improving himself. Mob decides to get in shape and joins The Body Improvement Club.

The Body Improvement Club was glad to take him. This was one of the refreshing bits of the show. After Mob became a member of the club, he was one of their own. It didn’t matter that Mob wasn’t athletic. That he fainted when running. He joined the club, so he was one of their own. At one point they even went so far as to try to rescue, and fight for, Mob. It was acceptance in a group regardless of ability. They just cared that he was there and he was trying. They are  favorites of mine. This allowed Mob to explore, and expand, his sense of identity.

And then there is Mob’s employer: Arataka Reigen. 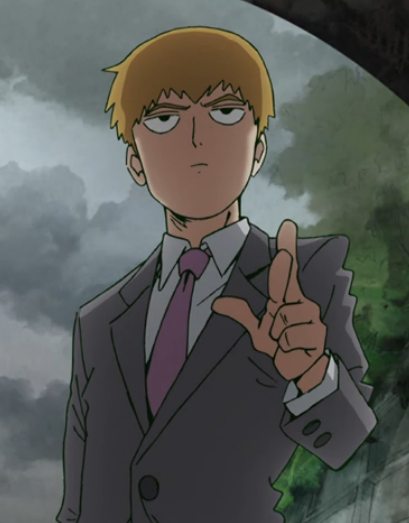 Reigen is a con man…But it isn’t as black and white as that. He sells himself as a psychic who claims to talk to spirits: he doesn’t. He takes easily persuaded people’s money and performs a service that, while alleviating the client’s problems, isn’t psychic or spiritual in any real sense as he leads them to believe. When confronted with an actual spirit, he calls in Mob. Reigen sets himself up as Mob’s mentor, letting Mob take on the “smaller” spirits as practice (which Reigen can actually do nothing about).  While client problems get solved, it is under false pretenses.

Reigen also takes on a protective role for Mob. He sees Mob’s uncertainty and awkwardness and works to protect Mob emotionally. He takes seriously (even though he is profiting from him) being a mentor and protector to Mob. In the quote below he normalizes Mob’s abilities.

“Listen well, we are different than regular people because we are born with special powers. But that shouldn’t give you the illusion that you’re a special being. We are part of humanity. Besides our rare power, we are no different than them. People who run fast, people who can sing well, people who study hard, people who are funny, and people with psychic powers. Are we different from them? Having confidence in your strength, is good thing but do not get carried away. Our powers are a dangerous weapon.”

This is why I love Reigen.

And throughout the show there is the struggle of: What makes a person special? What defines oneself? Does power define us? How we use power? Our abilities? Or something else?

Reigen “borrows” some of Mob’s power at the end of the show and gives perspective to the bad guys trying to take over the world. He points out to them, that even with special powers, you won’t get the validation you’re looking for.

I think that’s an interesting discussion to have. If you have kids: have it with them. If you have friends: have it with them. How to recognize and be happy with the person you are regardless of your abilities. Finding what makes you unique and special and being happy with that. And if needed, exploring new possibilities of who you are (or can be).

Attention Parents: There is a lot of “cartoon” violence in this show and only one scene where I thought it was perhaps a little bloody (which turns out to be a rouse).

*images in this post are not owned by this blog*