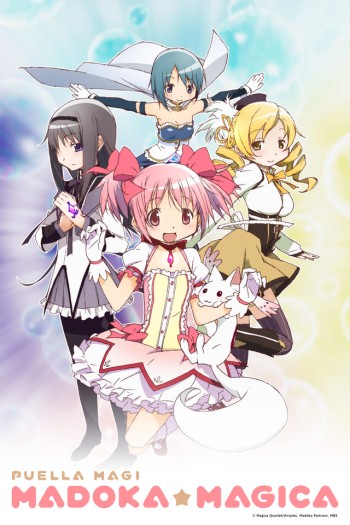 Puella Magi Madoka Magica was the first “magical girl” anime that I had ever watched. I am glad I did as it remains as one of my favorites.

I was not very familiar with “magical girl” anime, but was aware that it was a sub-genre at the very least.

I had started to watch it once because it was put out by Shaft (also responsible for Bakemonogatari, Mekakucity Actors, and Nisekoi) and I was a fan of their work. I got put off at first during the first episode thinking: “Oh this is going to be too cutesy for me.” So I set it aside.

Several months later I was looking for something to watch while I was folding laundry and thought I’d give it another try. By the third episode I was hooked and my perception was changed (all who have watched the series know why).

I am not going to say much about the story line except that is about some middle school girls who become magical girls to fight witches. This maybe a dull description, but the show is anything but dull.

The art direction is great and a real joy to watch(complete with Shaft head tilts). 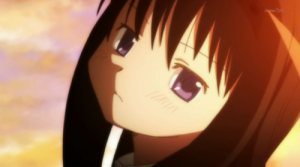 It also features some great music from Claris and Kalafina.

But is it Yuri??? Maybe, I don’t know or care really. If there were middle school girls in love, it wasn’t illicit or exploitative. I know a lot of fans will say it is (and perhaps the 3rd movie Rebellion sheds some light on this) and that is fine. My son, who is gay, perhaps sees (rightly or wrongly) a relationship that I overlook or downplay. And I think this is good, that he sees something that positively reinforces his worldview.

I highly recommend Puella Magi Madoka Magica. Beautiful art, great story, good music, and Shaft head tilts. What more could one ask for? This is a show I definitely return to.

Attention Parents: There are some dark themes and a few deaths. Also, get through the show a little before getting your kid the cute Kyubey plushie. Just trust me on this. 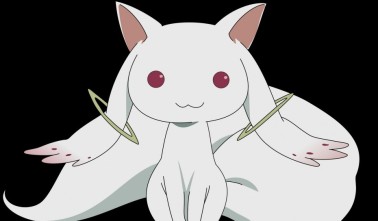 As a parent and a viewer of anime I will occasionally run into something that challenges my perception of myself and comfort level. This season’s Yuri Kuma Arashi did this for me.

The story is: A planet exploded long ago resulting in a meteor shower that hit the earth. This meteor shower caused the bears of earth to rise up and start eating humans. To protect itself humanity erects a giant wall named “The Wall of Severance” to keep bears and humans separate.

The opening follows two classmates who are lovers tending to their garden on school grounds and professing their love for each other. I watched this. I thought: “Fine. They’re a couple of girls in love. So what?”

And then I watched the OP.

“That’s it! I’m done. I am not going to be the dirty old man watching this!”

Or so I thought. That is the value of connecting oneself to a larger community of viewers: perhaps your bias may be exposed to yourself. A few days after I dismissed Yuri Kuma Arashi I happened across a review of episode 3 on “RABUJOI – An Anime Blog” by Oigakkosan. It made me think that perhaps I dismissed it too soon.

“Hmmm. The opening made pause and wonder if the show was just exploiting Yuri themes for the sake of it. I’ll have to give it a fair look based off of your review.”

“no no it is, to a degree. In the same way Kill La Kill exploited flesh and violence to make it’s over the top revenge story grab our attention. Yurikuma really nails it (this week) with the visuals: Pattern making, repetition of patterns, and the use of physical objects that could actually be symbols or hold symbolism for more things. It’s visually quite stunning, bizarre, and even has an element of retroness that is envogue these days. I’m not sure the series is for everyone, but you owe it to yourself to watch up to this one and see if it fit as perfectly together as it did for me.”

So I did. I was pleasantly surprised.  The symbolism and basic off beat of the nature of the show reminded me of one of my favorites Mawaru Penguindrum and there was a reason for this, the same director Kunihiko Ikuhara.

Now the show is off beat and I would not let my 11 year old watch it due to the sexual content and adult symbolism going on. 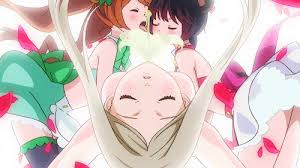 You see? Yes? If I let my son watch this, my wife would ban anime in hour house forever.

My bias come is not being offended by lesbian content. I don’t really care about that. My son is gay, so there is no moral objection. It came in the notion of perception of oneself. I am a 44 year old dad watching sexually suggestive yuri. I dismissed a show because I was censoring myself and I thought this is how “man of my age” should behave. That is where my bias lay: in my own ego.

I am glad I read the review and got the feedback. It challenged my original perception and I am now enjoying a new show.
Attention Parents: Nudity, adult themes, and sexual content. You have been warned.

and that is the sexy way. Shaba-da-doo