After a long break my son and I got back to Steins Gate: Episodes 5 and 6.

More exposition occurs. The IBN 5100 is gotten up and running. Daru hacks into SERN and the larger fears are confirmed: SERN is (and has been) doing time travel experiments and people have been dying.

We find that Suzuha is not a fan of Kurisu and warns Okabe not to trust her. 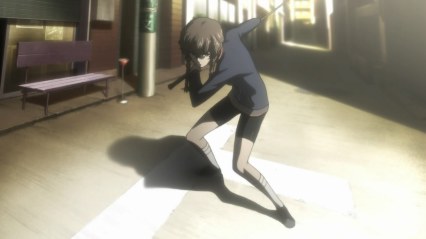 Further experiments are done with the microwave and the emails that go back in time (now dubbed “d-mails”). They do experiments and deduce some of the rules around how and what can be sent through time.

We also get Moeka Kiryu back into the story as she shows up on the lab’s doorstep with a decided interest in seeing the IBN 5100. After everyone inadvertently spills the beans about the time machine microwave in front of her, Okabe feels compelled to make her a lab member as well.

The most socially awkward Moeka.

And that is a minimal synopsis of what happens in these episodes.

There are the scenes of the dead SERN experiment volunteers which may be uncomfortable for some, but they weren’t so graphic that I worried and my son didn’t seem to bat an eye at them either.

Gruesome? A little, but not overly so.

What I find the biggest challenge for my son is the content. This is not on an appropriateness level, but a complexity of the subject matter. While he enjoys Okabe’s madness and Daru’s perverted jokes, the content of the story is confusing. He admitted that the characters speak fast and it is hard to keep up, but has a general idea of what is happening. But this is a time travel show with lots of  content and explanation of made up theory. It is really well done, but for an 11 year old who may not be giving it his full attention, it can be a hard show to follow.

Does this stop the experiment? No. We’ll keep watching as long as he’s enjoying it.

2 thoughts on “Watching Steins Gate with My Son: Episodes 5 & 6”

Leave a Reply to The Otaku Judge Cancel reply