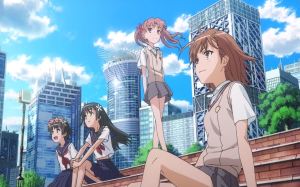 “Adventures in questionable parenting” is what I dubbed the weekend when I took my 2 sons (11 & 14) Anime Midwest in Chicago this last July.

It started out innocently enough. We got there early. Checked into our hotel room. Got our badges and we were set. One of the first panels we thought would be fun to see was: “The Anime Fan Parody Show”. Fan made parodies of anime’s re-dubbed. There was no age restriction, so I thought: “Why not?”

This was perhaps the most questionable event we did at the Con. Otherwise it was just staying up too late, eating dinner at midnight, giving young kids coffee drinks and being around a lot of cursing young adults.

But it leads to a question: What is your threshold level of bad behavior or influences when it comes to your children and media?

I made the mistake of letting my boys watch “A Certain Scientific Railgun”. I really liked the story and how it dealt with how people can corrupt science for power. So I kind of glossed over (in my brain) a certain aspect of the show.  Kuroko’s rather “adult” obsession with Misaka. Kuroko is the standard anime pervert character. However when my 11 year old son was watching Kuroko sexually harass Misaka in the shower my wife was not amused. She was really disturbed. She did not want him to see anything like that at his age. Fair enough. Like I said: I glossed over this aspect of the show (a small part) for the larger part for me which was a good story.

That being said. That is in part what I hope to address on this blog. To tell parents what might be in a show that they may find objectionable. Not to make a judgement or suggest an age guideline.  Each individual will have their own feelings about what is appropriate for their child and what is not. I am not a professional reviewer or writer. I am just a fan and a parent.