While not about anime, it is something I nerd out about: Music.

The boys and I are off to Milwaukee Saturday to see heavy metal bands: Kamelot and Dragonforce. While Dragonforce are okay, I love Kamelot. I have been hoping to see them for several years and missed them several times when they’ve come through my way.

So here is some Kamelot.

From their newest album: Haven

From their album: Silverthorn

With their old singer Roy Khan, my favorite song by Kamelot: Memento Mori

Looking forward to the show!

My biggest love (besides family) is my love for music.

Whenever I get exposed to something new I want to share it with others So today, dear reader, I share these bands with you.

I have mentioned all of these guys in my Anime Midwest posting, but I thought I’d give them a separate post.

A former teacher turned nerdcore (or chiptune) rapper, Mega Ran has some great music. I caught his show by mistake at Anime Midwest, but am really happy I did. He is amazing live. So, I got a couple of his albums and he got a new fan.

Also at Anime Midwest, I did not actually catch his show, but did see him on a couple of songs during Mega Ran’s set. A former hacker and early nerdcore rapper, ytcracker has some really good music as well. I got two of his releases and have enjoyed them quite a bit, especially the thought provoking “Cognitive Dissonance”.

A couple of brothers delivering what they term as “pop macchiato” put out some unique and catchy tunes. I caught their small acoustic set with my 11 year old and bought their CD. We have been enjoying them since.

Visit them as well:

I hope you enjoy these bands and if the convention you go to feature some smaller, unknown (to you) bands/ artisits: Go and check them out! You never know what you’ll find.

Heyo, I’m the hella homosexual 15-year old son of the owner of this blog! I kinda just got on my dad’s laptop and he doesn’t suspect a thing at the moment since he’s watching some live-action show (ew real people). (Just kidding, it’s the Mindy Project.)

Anyways, I’m gonna let you into a world that my dad doesn’t dabble in: The world of Nico Nico Douga and YouTube.

I should probably explain what an “Utaite” is before anything else.

An Utaite is a singer, one who covers Japanese songs (particularly Vocaloid ones from varying producers) and uploads them to the Japanese equivalent to YouTube, Nico Nico Douga.

If you’ve heard artists like MARiA from Garnidelia, the vocalist who sang “Ambiguous”, the second OP to Kill la Kill and the Mekakucity Actors OP “daze” or CHiCO , who occasionally sings with the producer Honeyworks for anime OPs (“Sekai wa Koi ni Ochiteiru” from the anime Ao Haru Ride or “Ai No Scenario” from Magic Kaito 1412), those vocalists started out as Utaite.

Now for the Youtaite side.

As the name suggests, a Youtaite is basically the same as an Utaite, but rather than upload on NicoNico, they generally upload on YouTube (although some Youtaite/Utaite do both). Popular youtaite include Amanda Lee, JubyPhonic, Rachie, Chishio, Razzy, Saint, Sojiro, Mica Caldito, and countless others.

BUT, there are things to distinguish.

There are many different jobs that Youtaite and Utaite can have:
1.) Vocalist: This is pretty self-explanatory, the vocalist is the voice you hear in the cover.
2.) Mixer: A mixer is a magician– I mean, a mixer is someone who takes the raw vocals for a cover and edits them so they sound clearer, on-tune, and more connected to the instrumental. Mixing is one of the most important things when it comes to vocal covers.
3,) Instrumentalist: They make off-vocals, arrangements, and/or remixes for songs. The most popular example would be dj-Jo (but I like to call him the dubstep god).
4.) Artist: Many (Yo)utaite like to have original art for their covers.
5.) Animator: Similar to an artist, many people like to have original PVs, especially for choruses (which I’ll explain later).
6.) Translyricist: This is a more exclusive one. People who like to cover songs in English, Chinese, or any language that isn’t the original have to write or use other people’s translyrics (standing for “translated lyrics”). Translyricists have a lot of freedom in making the song theirs. They take the original translation, interpret the meaning of the song, and then convey them in a way that the words can flow naturally in whatever language they’re writing for.

I personally am both a vocalist and English translyricist. I enjoy interpreting songs, especially those from an anime that I’ve watched, as I can also connect the lyrics to the anime (I avoid making direct references to the show, and I’ve analyzed some songs more in-depth than my English papers).

The Youtaite community is extremely adverse, and pretty much everyone is really friendly and open! I’ve made several amazing friends, and collabed with them several times on different projects. There are many talented people that I’ve had the pleasure of talking to (and eventually collaborating with some of them).

This is my channel. I know I have a lot to learn, but everyone is always working on improving their work, and always helping others do the same! It’s a really caring community, and it’s very fulfilling to hear compliments along with constructive criticism!

Sorry that this is probably super boring without videos and pictures and whatnot, but I’ll still be back one day, just you wait…

Until then,
Glace (the son)

The new Nightwish album, Endless Forms Most Beautiful, is out. The Finnish symphonic metal band has put out this new album, the first with their new vocalist, Floor Jansen. It draws on science and the natural world for several of the lyrical themes on the album. It is worth a listen.

Shudder Before the Beautiful (With spoken introduction by biologist Richard Dawkins)

Give them a listen:

Because sometimes you just need to hear it…Especially from World Order.

Babymetal formed as an offshoot of the female idol group, Sakura Gakuin. The producer, “Kobametal”, wanted a way to feature Suzuka Nakamoto’s (Su-metal) vocals and thus came the idea for Babymetal. With two back up singers/ dancers Moametal and Yuimetal to provide contrast along with an extremely talented backing band you now have this powerhouse of j-pop vocals over brutal technical metal.

And it has worked….

But can they win over metal fans? I would say: to some degree: Yes! They played (successfully at Sonisphere without getting booed or laughed out of the place.

They have met some of metal’s biggest acts (admittedly they had no idea who they were meeting half of the time). 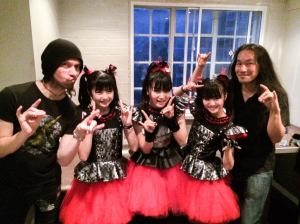 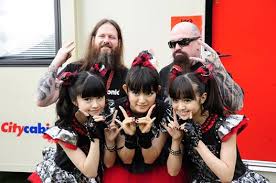 As well as another of the “Big Four”: Anthrax.

Oddly (or not) enough they also have toured with Lady Gaga.

Does this have anything to do with anime? No, not really. But I do believe that if AKB48 could have an anime based off of them, so could Babymetal. I somehow envision them fighting demons with the power of metal and j-pop. To whoever develops this idea into a show: you’re welcome.

Listen to Babymetal, love Babymetal. Head-bang and dance. Enjoy, because life is too short to take things to seriously all of the time.

I will be the first to admit that I am a nerd for epic things. I love an over-the-top bit of action. Bombastic music. Heavy Metal.

Metal filled this need in me. Dragons, demons, warriors, and wizards all could be found there. Cheesy, epic goodness. Metal acts from Europe have been great in filling that need for epic music.

Within Temptation has some great music. Check out this song featuring guest vocalist, Xzibit.

Nightwish from Finland has been perfecting their big sound over the years. Ghost Love Score is a perfect example.

But this is an anime blog, no?

Ok. So what are the OPs and EDs that are most epic?

I would be remiss if I did not include the Attack on Titan OP first.

Only My Railgun by Fripside is pretty a pretty big sounding bit of electronica.

But for me lately it is the Guilty Crown OP by Supercell. I can’t get enough of this song.

Do yourself a favor and listen to the full version. Turn it up. Bask in the awesome!